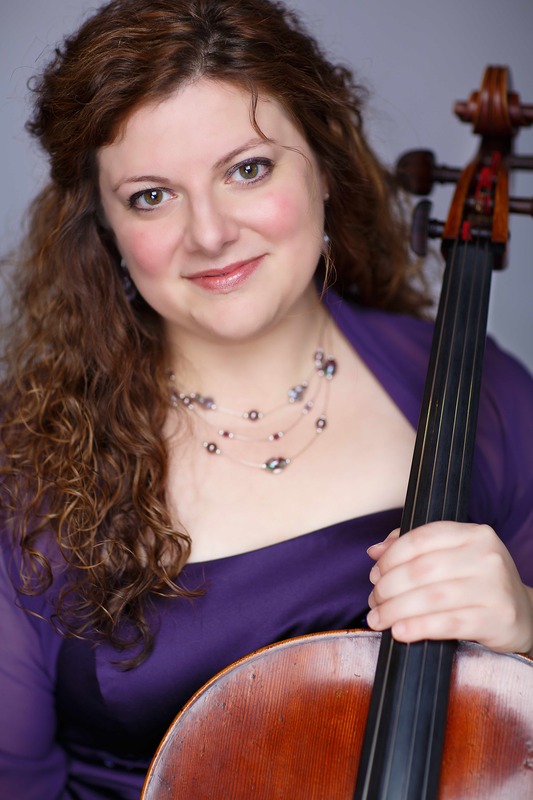 Cellist Elisa Kohanski enjoys a diverse performing career, appearing regularly as soloist, chamber musician, and orchestral player, and championing unique collaborations with artists of other disciplines. A highly-regarded solo performer, Elisa was featured in the world premiere of Richard Danielpour’s Come Up From the Fields Father with the Wheeling Symphony. She has performed the Elgar Cello Concerto with several orchestras including the Edgewood Symphony Orchestra. Most recently with her piano trio, Trio Nova Mundi, she commissioned and premiered Spanish-American composer Elisenda Fabregas’ Triple Concerto with the Atlanta Virtuosi, under the baton of Juan Ramirez.

A native Rhode Islander, Ms. Kohanski has a love of travel which, combined with her passion for music, has brought her to over 60 countries around the world. She recently visited her 7th continent, Antarctica, and performed there to an audience of people and penguins, who seemed to enjoy it! In Africa she has explored Tunisia, Morocco, Egypt, Tanzania, South Africa, Zimbabwe, Namibia, Mozambique and Botswana. A love for Africa was the inspiration for a three-country tour of the Continent with Trio Nova Mundi, Ensemble-in-Residence at Grove City College until 2018. Ms. Kohanski, along with pianist Becky Billock and violinist Maureen Conlon Gutierrez, presented nine concerts over the course of two weeks, in addition to numerous workshops and performances for children. The African tour inspired future tours to Mexico and Chile.

Ms. Kohanski has performed with dozens of top-billed artists, including the Miami String Quartet, Olivia Newton John, Robert Shaw, Garrison Keillor, Phil Keaggy, John Tesh and Harry Connick Jr., and has played in some of the most prestigious concert halls around the world. In addition to touring China and the US with the Mantovani Orchestra, she has performed in Carnegie Hall in New York City; Royal Albert Hall in London, England; Schlossfestspiele in Heidelberg, Germany; and the Stefaniensaal Concert Hall in Graz, Austria. She has performed at all of the major venues in Pittsburgh, including Heinz Hall, the Benedum Center and City Theater.

Ms. Kohanski is a founding member of IonSound Project, the Ensemble-in-Residence at the University of Pittsburgh from 2009-2019.  IonSound has received critical acclaim for original programming, a fresh approach to contemporary music, and a commitment to the city of Pittsburgh. Elisa has been praised in the Pittsburgh Tribune-Review for her “ardent” playing in performance with IonSound Project. She was also featured on IonSound’s CD by Jeremy Beck, touted as “thoroughly engaging from top to bottom” by NewMusicBox. In addition to the IonSound CD, Elisa can be heard on several recordings ranging from orchestral to popular music including Giacinto Scelsi- The Orchestral Works 1, Daphne Alderson’s albums, Joan of Arc and 16 and Trio Nova Mundi's debut CD, Canticum.

Each summer, Ms. Kohanski can be heard in performances with Music on the Hill, in which Rhode Island natives return to perform chamber concerts throughout the state.  The festival repertoire ranges from J.S. Bach to Osvaldo Golijov, and regularly features world class artists such as William Preucil, James Dunham, Ronald Leonard and Daniel Gilbert. Elisa has performed in several summer festivals including the Interharmony International Music Festival in Archidosso, Italy; the AIMS Festival Orchestra in Graz, Austria; Music&More SummerFest in Trebinje, Bosnia and Herzegovina; Piccolo Spoleto Festival, and the Heidelberg Castle Festival.

Ms. Kohanski earned her Bachelor of Music Degree from the Eastman School of Music as a student of Pamela Frame. She received her Master of Music Degree from Carnegie Mellon University where she studied with Pittsburgh Symphony cellists Anne Martindale Williams and David Premo. Other notable teachers include Timothy Terranella, Carol Pellegrino, and Elizabeth Reardon.